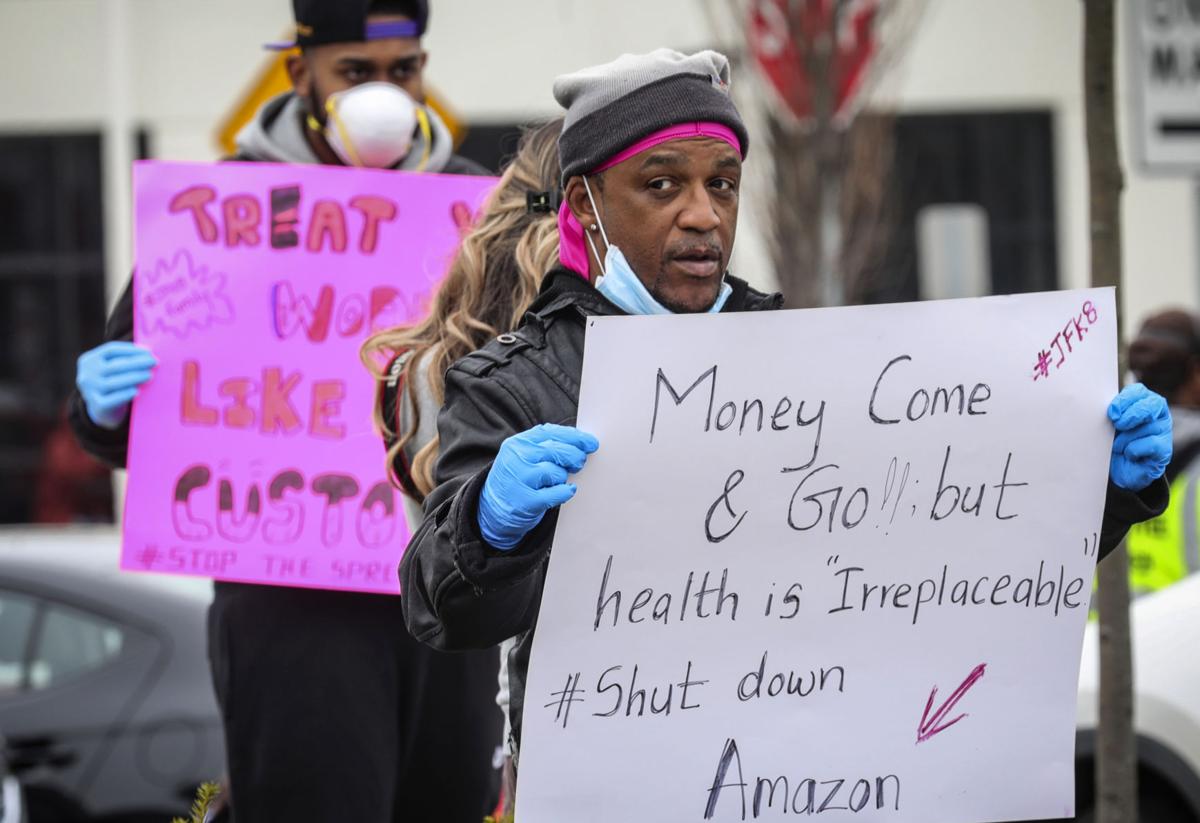 The double, health and socio-economic crisis caused by the COVID-19 pandemic, has subjected workers, both male and female, all over the world to the same problems: protecting themselves and their families from contagion and risk of life while they are forced to work, and defending themselves from impoverishment and hunger for people who are jobless due to the closure of businesses.

On May 1, the workers’ international day of struggle, in most countries workers and trade unions were unable to hold their traditional demonstrations; in most countries, governments, on the pretext of preventing contagion, did not allow holding even small demonstrations in compliance with social distancing and with masks on. Also the Italian Government sent in the police to stop and heavily fine even small groups of demonstrators.

However, the iron fist, albeit disguised as sanitary rigour, cannot stop workers’ struggles.

In Italy, SI Cobas, together with AdL Cobas, another militant union, reacted since March to thE outbreak of the infection among logistics workers with the request to close all non-essential activities, guarantee 100% of wages, and calling workers to abstain from work in the absence of adequate safety conditions: Life before profit! In many warehouses, after days and weeks of abstention, agreements have been signed to reduce volumes, guarantee anti-infection safety to those who remain at work, and payment of full wages to those who stay at home.

In other warehouses, the bosses have resisted, playing on workers’ fear of losing their jobs – and replacing them with temps -, on impunity as government decrees provide no penalties for non-compliant businesses, on police intervention to prevent picketing, and on collaborationist unions.

This criminal policy of the bosses has been responsible for the deaths of many workers.

That is why SI Cobas and AdL Cobas have called a strike for April 30-May 1, for life
before profits, against the pro-capitalist management of the pandemic by the government and local authorities, demanding safety in the workplace, full wages for all furloughed workers, freedom of assembly and strike, universal, free and expanded public health care, regularization of immigrants, and to make capitalists pay for the crisis with a 10 percent wealth tax on the richest 10 percent –taking back some of the wealth accumulated on the exploitation of millions during the last decades.

A real strike, not a virtual demonstration.

Thousands of workers, especially in logistics, but also in meat packing plants, have
responded enthusiastically: https://www.facebook.com/sicobas.lavoratoriautorganizzati.9/photos/pcb.1250021221863239/1250018855196809/?type=3&theater.

Their struggle on the occasion of May Day marks a point of reference for all workers in Italy who do not want to resign themselves to the supine passivity of official unions and want to resume the path of struggle.

For this reason we feel particularly close to those in other countries who have gone on strike or taken to the streets in defiance of possible police intervention.

In particular, U.S. workers who on May 1st, a working day, went on strike and drove
caravans through several cities.

These included groups of workers at some of Amazon distribution centers (https://mayday.pacifica.org/2020/05/01/may-day-2020-amazon-strike-action-in-hawthorne-ca-pt-1/ ) and port and logistics workers in the West Coast, in San Francisco and Oakland, organized with ILWU – International Longshore and Warehouse Union (video interviews from their strike and demonstration: https://www.youtube.com/watch?v=A98SAF9MsDs ).

They demanded safety and respect for workers, and emphasized the working-class and internationalist unity meaning of May Day, also opposing the right-wing movement of white supremacists, who demonstrated for the indiscriminate reopening of activities, with Trump’s applause, in support of capitalists who can stay in splendid isolation in their spacious villas.

Our solidarity goes to the protesters in Lebanon, where May 1 saw the continuation of protests and street riots against the government, by workers, employees and self-employed, left without work and with no income in the lockdown, no public safety net; there also working people have seen their wages cut by the 60 percent devaluation of the Lebanese pound and the ensuing high inflation: it means hunger, which risks reaping more victims than coronavirus itself.

In the previous days the branches of several banks in Tripoli were set on fire, and on May 1st a crowd demonstrated in front of the headquarters of the Central Bank, symbol of the financial power of the rich against the proletarians.

News of class struggle also comes from Zimbabwe, where workers in the agribusiness, represented by the United Food and Allied Workers Union of Zimbabwe, have decided to abstain from work and strike because of the lack of protection equipment and to demand that wages be paid to all workers who lost their jobs because of the quarantine.

In addition, despite the ban on strikes and meetings, workers and the UFAWUZ are setting up independent online platforms for assembly and discussion.

In many other countries, the most combative workers have challenged the repression and took to the streets.

Below is a partial list of the demonstrations we have heard about.

In Germany the police disbanded marches in Berlin, but could not prevent gatherings of thousands of young militants and onlookers; sit-ins were organised with banners and speeches in several cities.

In the UK, on April 30, the international Labour Memorial Day, intensive care nurses of the St. Thomas Hospital have blocked the Westminster Bridge with banners and posters: “WE ARE NOT DISPOSABLE”protesting against government coronavirus policy and lack of protection for healthcare workers, which has caused many casualties among them.

This is a problem common to all countries.

Healthcare workers and the whole working class must struggle against healthcare managed as a business where the bottom line are profits, not the people’s health and lives.

In Greece, thousands of militants, workers and female workers, unemployed and students gathered in Sintagma Square, outside the Greek parliament, where they demonstrated ‘responsibly’ but firmly.

In addition to protection gear, the sit-in was organized with paint or paper markers at 1 meter intervals in order to keep safety distances.

In Portugal, too, despite the approaching easing of confinement measures, a mobilization has been called while respecting safety distances and “occupying” the gardens of Avenida da Liberdade.

Workers’ demands were alongside those of temporary workers who, due to the
crisis, have already lost their jobs.

In Japan, the Doro-Chiba railway union organized a combative demonstration in front of the Ministry of Health, Labour and Welfare, and in front of the Prime Minister’s residence (https://youtu.be/_EKpBLx4OAQ ).

In Turkey, where May Day has a strong tradition, the government arrested 15 trade unionists from DISK, a radical trade union, as they left their headquarters to lay a wreath on Taksim Square, where thirty-four demonstrators were killed by the police on May Day 1977.

They were later released, and were allowed to reach Taksim Square. 30 more militants were arrested in Istanbul and Ankara, and later released.

In Chile, the police arrested more than 50 demonstrators wearing gloves and masks in Santiago’s central square, who were carrying signs against exploitation and the sharp increase in dismissals.

In Chile there is a ban on gatherings of more than 50 people.

In Argentina, too, the police arrested 13 trade unionists who had unfolded a banner and were singing the Internationale near the palaces of power; also journalists and photographers who were filming them were arrested, while a hundred or so militants were demonstrating in the Obelisk Square with signs: WITH HUNGER, NO QUARANTINE / STOP DISMISSALS.

SI Cobas, a multi-ethnic and internationalist trade union, is committed to forging ever closer ties with militant unions around the world, believing it essential to achieve international unity of workers, to strengthen their class awareness and their common struggle, both for immediate working conditions and against capitalism for a better world without exploitation: https://www.facebook.com/306442629554441/posts/1250917388440289/.