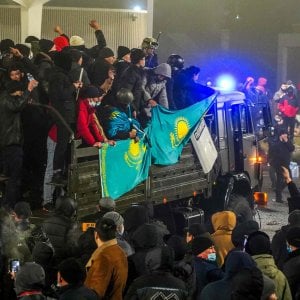 WITH THE WORKERS AND PEOPLE’S UPRISING IN KAZAKHSTAN

Down With the Capitalist Regime, Russian Troops Go Home!

The uprising in Kazakhstan, which President Tokayev attributes to ‘terrorists’ on the payroll of unspecified ‘foreign powers’, was actually started on 2 January by workers in the industrial city of Zhanaozen, and soon spread to the entire western mining region of Mangystau. It therefore has a clear working class character.

Last summer, these workers had been the protagonists of a wave of successful economic strikes, which brought about the doublig of wages; but the doubling of the price of LPG, the main fuel for cars in the country (produced locally), following the liberalisation of energy prices – although at low levels under Western standards (from about 0.12 to 0.24 euros per litre) – has appeared to them as a mockery that wipes out what they have wrested through struggle.

However, this would not have led to an open uprising against all state institutions if this sense of social injustice had not been accompanied over the years by an irreconcilable distrust, a genuine contempt, a deep hatred of the ruling class, of the clans in power, ever since December 2011 when the police fired on the workers of the Ozenmunaigas oil field in Zhanaozen, who had been dismissed in May (over a thousand of them!) following a strike.

They were fired upon with live ammunition to clear the square they had been occupying, where the Independence Day was to be celebrated: at least 14 were killed.

Although the ‘founding father’ of the Kazakh republic, Nursultan Nazarbayev, tried to distance himself from this massacre by dismissing some officials and his own son-in-law, many of those who took part in the protests against the massacre were arrested, tortured and sentenced to jail.

This time they have said ‘enough!’, occupied the local seats of power, disarmed the ‘security forces’ (some sources say some of the latter have joined the insurgents) and taken control of local power.

But the revolt would have remained a regional affair, easier to isolate and suppress, if that feeling of contempt and hatred against an oppressive state, against the ruling clique of capitalists and corrupt individuals enriched beyond all limits – according to KPMG’s calculations 162 people, enriched through privatisation and mining revenues, own 55 percent of all the wealth of the country – was not shared by millions of inhabitants of the major cities, starting from Almaty, where crowds of thousands of unemployed young people with no future ahead responded to the call of the Zhanaozen workers (before the government’s blocking of social media and the internet) and poured into the city centre together with groups of workers, attacking the palaces of power, setting fire to the city hall, and also a TV tower, attacking the police, overturning and setting fire to their vehicles, and reportedly also seizing weapons stores.

There are also reports of shop looting and vandalism, but revolutions are not gala parades.

As the Algerian protesters have been asking for two years, the Kazakh insurgents are not content with a change of people in power, they are asking to change the “system”: a radical request even if inevitably vague in the proposed alternative, since the movement lacks political direction.

Struggling to suppress the uprising, Tokayev has called for the help of CSTO (Russia’s NATO) troops, which Putin, even while engaged in the showdown in Ukraine, promptly dispatched.

This is the first time the CSTO has mobilised troops in support of a member state.

And it does so not against an external enemy, but against an internal insurgency. With the open support of Russia’s main parliamentary ‘opposition’ party, the supernationalist Russian ‘Communist’ Party, which, ignoring the working-class nature of the uprising, has upheld the allegation that the uprising is the work of ‘terrorists’ financed by Western governments, applauding the crackdown, and has supported the deployment of Russian troops, calling for the strengthening of the
integration of the Eurasian Economic Union of the former USSR states.

China for its part has given its support to Tokayev, with a few days delay on 7 January.

Western governments are keeping a low profile, wishing for a rapid solution without bloodshed and with the ”respect for human rights”… after all, on 5 December Biden himself had congratulated Tokayev on the 30th anniversary of the
Kazakh Republic.

The repression has been extremely harsh, with Tokayev giving the order to shoot on sight without warning.

Official figures report 162 deaths and 8,000 arrests, a figure that testifies to the fact that tens of thousands of people took part in the protests, disproving the allegation that they were Islamist gangs trained abroad.

No protests against the repression of the movement has come from “democratic governments”, nor against the sending of Russian troops.

Several large American and European companies, especially in the energy and
mining sectors, have been participating for decades, with satisfaction and profits, in the exploitation of Kazakhstan’s huge natural resources (2.7 million square kilometres, the size of Western Europe), starting with oil and gas, with the American ExxonMobil and Chevron, Italy’s ENI and the French Total, playing a major
role in the exploitation of some of the world’s largest deposits and in the management of oil and gas export pipelines.

Since 2005, they have been joined by the Chinese CNPC (which acquired the state-owned company Petrokazachstan) and Sinopec, with investments totalling $20 billion, including oil and gas pipelines to China.

Furthermore, Kazakhstan is the world’s largest producer of uranium, with 40% of global production.

Its supplies to nuclear power plants around the world – in the USA, Canada and Europe, but above all in China, which buys about half of it – are known for their regularity and reliability, but these days they have been interrupted by strikes by industry and transport workers, pushing up the international price of uranium by 8%.

Likewise, the Italian government, which in addition to the prevalent interest of ENI (with stakes in the Karachaganak and Kashagan deposits), also represents those of several dozen companies in the exploitation of Kazakh workers, favours the restoration of the capitalist order.

The order of global capital must reign again in Kazakhstan without delay, and for the time being it is Tokayev and his associates who guarantee it for everyone.

Actually, the various imperialisms share a common interest in the stability of Kazakhstan, with the Western imperialisms – and presumably Turkey – concerned that Russian intervention might break Kazakhstan’s geopolitical balancing, and allow Russian influence to prevail.

Against this de facto international support to the suppression of the Kazakh insurgency, we express our full solidarity with the workers who have risen up to overthrow the Kazakh political system headed by capitalist billionaires, and which sees a close collaboration between multinationals and local state and private companies, in concert with the government, in the exploitation of the Kazakh working class and natural resources.

The bloody repression appears to have succeeded, for the time being, in crushing the uprising in Almaty, and in Mangystau.

The vanguards of the working class opposition movement, although decimated by arrests, are faced with the need to consolidate an anti-capitalist and internationalist tendency capable of enduring beyond the crackdown.

The fact that the uprising movement, although displaying Kazakh flags, has not taken on hostile attitudes towards the Russian-speaking minority, favours its consolidation as a class movement.

It is our duty to seek connections and support such a movement.

There are several points still to be clarified in what is happening in Kazakhstan.

Why was the father-master Nursultan Nazarbayev dismissed from the Security Council, to which he had appointed himself president for life?

What prompted the arrest of the head of the National Security Committee, Karim Masimov, for ‘high treason’?

It is clear that a confrontation is taking place within the Kazakh leadership.

What’s the nature of this confrontation?

Nazarbayev, former Prime Minister of the Republic of Kazakhstan, later Secretary General of the Communist Party of Kazakhstan at the time of the USSR, is one of the few leaders who remained in command with the disintegration of the USSR: he has used Kazakh nationalism to consolidate independence, including by moving Kazakh population to northern regions to reduce the ethnic Russians (many the descendants of people deported by Stalin) to a minority – for this purpose the capital was moved to Astana.

Nazarbayev opened up to the US and Europe without, however, undermining relations with Moscow, and has continued to balance relations also with Turkey and especially in the last two decades with China, which has the economic clout to prevail over Russia as a hegemonic power in Central Asia.

As elsewhere, China, while hinting at a certain concern for the possible strengthening of Russian influence, maintains a low-profile political stance, confirming its support for Tokayev, saying that she prefers to provide “economic assistance”, even if she might have intervened in the framework of the Shanghai Cooperation Organisation (it also includes Russia and Kazakhstan, under Chinese leadership), which despite not being a real alliance provides for cooperation against “terrorism, separatism, extremism”.

We cannot therefore exclude that factions of the Kazakh establishment have tried to use the rebellion of the oil workers of the Mangystau province for their own power plays and different international alignments.

What is certain is that the Kazakh working class will not find allies in these bourgeois factions, divided on geopolitical choices but united in guaranteeing the exploitation of the Kazakh proletariat. Its potential allies are the workers of other countries, and the instinctively revolutionary struggle of the Kazakh workers to overthrow the “system” is just the latest example that shows us the need to work to rebuild an international class-based anti-capitalist united front.

With Kazakh workers fighting against that authoritarian capitalist regime!

Against repression and the intervention of the new tsar’s Holy Alliance!

Proletarians of all countries, let’s unite!