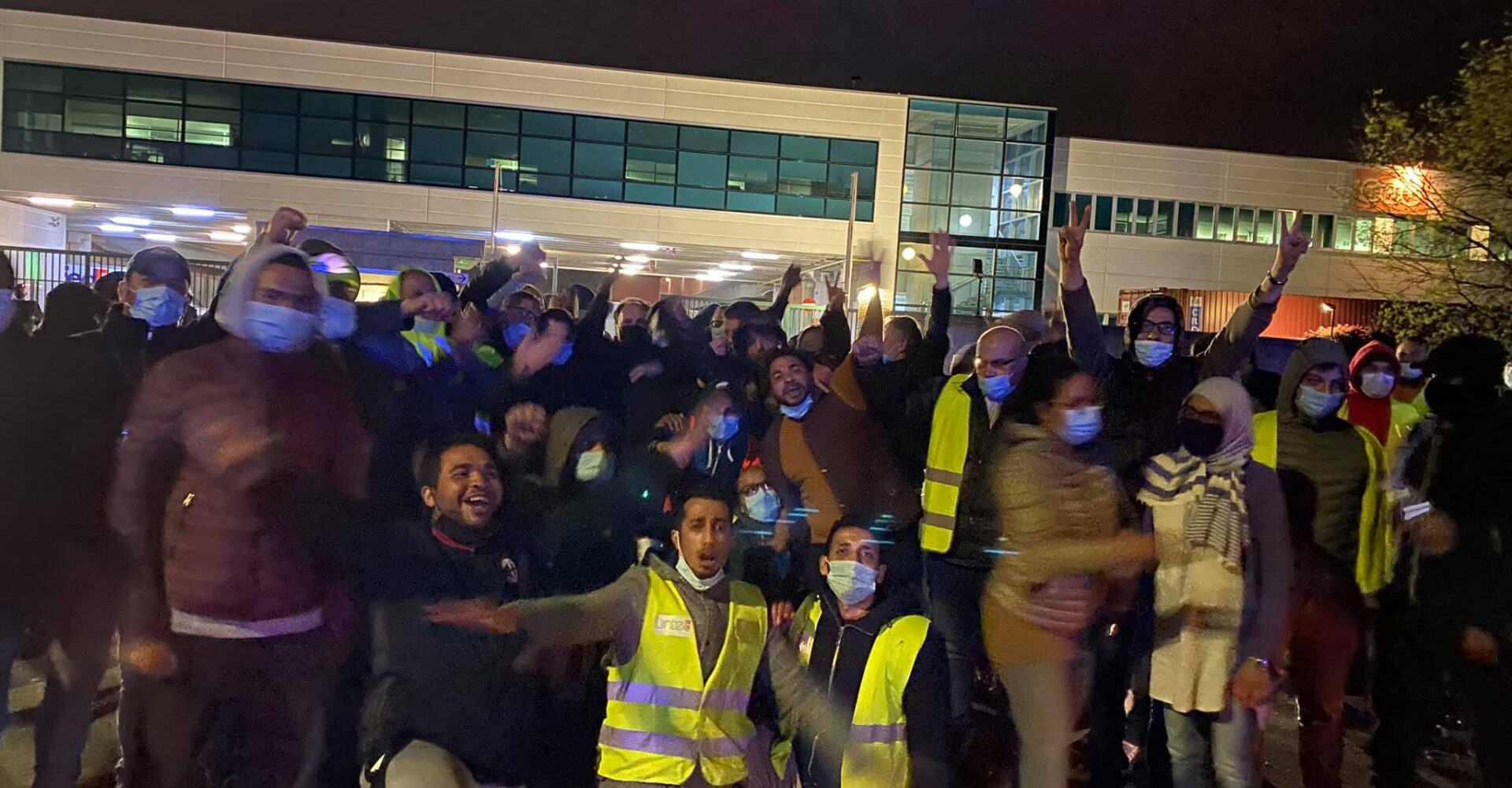 a Fight for Jobs, against Precarisation, and for the Right to Unionise

The struggle of the TNT-FedEx workers in Italy is both an economic and political struggle.

The strategy of the American multinational FedEx is two-pronged: cost cutting in the main hubs through the reduction of the number of workers employed and the cancellation of wage gains obtained in a decade of struggles; and the suppression of militant union, to break down any form of worker resistance.

In January FedEx presented a plan with 6,300 redundancies in Europe following its acquisition of TNT in 2016, and started with the dismissal of 671 workers in Liège, Belgium, where the union responded with two days of strike, receiving the support of the SI Cobas workers in Piacenza (Italy), who were fighting for the renewal of the local contract and for employment guarantees (about 90% of the workers are SI Cobas members).

The strike in Piacenza lasted a fortnight, with a picket line blocking truck circulation.

On the evening of January 31 the riot police intervened in force, shooting tear gas canisters on workers sitting on the ground (several were injured), but to no avail, as the picket line soon swelled again, with the support of workers from other companies.

For this reason FedEx had to give in, and two days later in negotiations at the Prefecture the workers obtained their demands from the warehouse contractor and FedEx, which signed a commitment to maintain the workforce at the Piacenza warehouse (280 workers).

However, on March 9 at 6 am, 21 police teams entered the homes of as many FedEx workers, searching them, seizing PCs, cell phones, clothing.

Two union organizers were placed under house arrest; 5 workers received the ban from setting foot in the municipality of Piacenza (even when residing and working there), while another 6 were notified of the procedure to revoke their residence permit.

Together with 8 other workers, they were all charged with the crimes of “aggravated resistance to public officials, aggravated personal injury and private violence, aggravated occupation of public land”.

The Public Prosecutor in a press conference denounced the fight against TNT-FedEx as violent actions unrelated to trade union activity, and SI Cobas itself as an organization having aims and ways of action alien to trade union practice, opposing CISL and CGIL as true trade unions (even if with no members in TNT).

On Saturday March 13 a large demonstration was organized in Piacenza against the repression measures, in support or the workers.

Feeling backed by the judiciary, FedEx shut down the Piacenza warehouse, leaving the 280 workers jobless and moving all the material to be handled from Piacenza to other warehouses.

This breach of a commitment just signed was a political, union-busting decision, not an economic one, given that there was no shortage of work for the Piacenza warehouse.

FedEx also announced the restructuring of its business in Italy, starting from the hubs of Padua, Bologna, Rome, Ancona, Naples: it will hire part of the workers directly – reversing decades of contracting out the management of warehouses – , with a cut of 800 jobs, and an extensive use of temporary workers, flexible and blackmailable.

SI Cobas has been claiming the end of outsourcing, but in order to unite and stabilise workers, not to reduce employment and wages, and increase precariousness.

In the United States FedEx, with a tough anti-union campaign, has so far managed to prevent its 200,000 employees from unionising (while workers at UPS, its competitor, are unionised).

In Italy, where regulations on trade unions and strikes are different, FedEx is relying on the official trade unions as ‘yellow unions’ to push back and possibly destroy, with the help of state powers, militant unions and SI Cobas in particular, which represents a large majority of workers.

In Bologna, at the Prefecture office, FedEx stated that it will not recognize SI Cobas, which represents 99% of the 200-odd workers, nor its worker representatives, nor grant them union permits, or paid assemblies.

They also want to choose whom to hire and whom to get rid of (the most combative workers, and those with health problems).

In Bologna, too, FedEx signed an agreement with CGIL, which has no members among workers; the three meetings it called went totally deserted…

In Piacenza CGIL has been directly organizing, on behalf of FedEx, the transport of the goods diverted from the Piacenza warehouse.

For these reasons, FedEx workers organized protests in front of the CGIL offices in Piacenza and Bologna.

30 CGIL members in Piacenza have criticised their union in an open letter, asking that it supports the struggle of SI Cobas workers to win back the 280 jobs.

FedEx has also left the employers’ association Fedit – which also includes other giants such as GLS, BRT (now owned by the French Post Service), DHL (German Post Service) and SDA (Italian Post Service) – in order to renege the labour agreements signed by Fedit with SI Cobas and AdL Cobas.

If this offensive succeeds, their competitors could be tempted to follow suit, and try to roll back all the workers’ achievements obtained in more than ten years of struggles.

But FedEx has found bread for its teeth.

By closing down the Piacenza warehouse it has freed the energy of the 280 laid off workers, who are organising the struggle with pickets at several warehouses where the goods removed from Piacenza have been diverted.

The picket of workers in struggle also had to face aggressions by about 60 body guards hired in another warehouse working for FedEx staffed with exclusively temporary workers in San Giuliano (south-east of Milan).

Despite frequent police interventions, and the ban on setting foot in the municipality of Peschiera Borromeo, near Milan served to about 20 workers, TNT-
Fedex has suffered daily disruptions in its activity, with big losses of revenue and customers.

But it has big pockets thanks to the profits it makes in the U.S. and other countries (gross earnings of nearly $2 billion in FY 2020), and is “investing” in union-bashing.

TNT-FedEx workers from Piacenza have been the protagonists of the May Day demonstration in Milan and have become a symbol of class resistance against capital in Italy.

The tenacious struggle of FedEx workers has reached the palaces of power, but they know their clout only depends on the picket lines and on the support of other workers in and beyond the logistic sector.

The ban on collective dismissals is going to be lifted From July 1st, and thousands of workers will face the need to struggle to defend their jobs.

A coalition of combative workers from different unions and sectors, which has been active since September 2020, besides supporting the struggle of FedEx workers, can help connect and generalise the struggles against layoffs.

The struggle over the restructuring of FedEx in Italy is about the preservation of jobs, wages and working conditions won through past struggles, against precarisation, and about the future of militant unionism.

SI Cobas wishes that the struggle at FedEx in Italy can help FedEx workers in Europe to oppose retrenchment plans, and inspire FedEx frontline workers in the U.S. to start again a fight for unionisation.