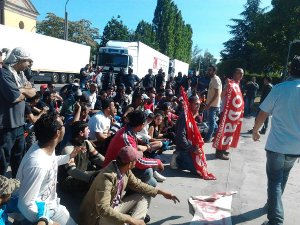 THE OCTOBER 11 GENERAL STRIKE IN ITALY

On Monday, October 11 a general strike was called in Italy by fifteen alternative unions.

It was the first such unitary strike in over one decade, in the effort to break the silence imposed on the working class by the official unions (Cgil, Cisl and Uil), which prefer “concerting” with the government than organising struggles in defence of workers’ conditions.

The strike has been called against the government and the bosses to support a list of demands, among which:

· stop dismissals of workers, reduction in working hours, with wage compensation, in order to “work less, work everybody”;

· permanent jobs against precariousness of temporary and fixed time jobs;

· no taxes on living wages, 10 percent wealth tax on the wealthiest 10 percent;

Circulation of goods was heavily affected.

Also workers in local public transport in several cities, organised with different unions went on strike, together with Alitalia airline workers (which is shedding 7,800 jobs), teachers in several schools and public servants.

Marches with thousands of participants took place in several cities, including Turin, Milan, Genoa, Bologna, Florence (with Gkn workers, who are occupying their factory against closure), Rome, Naples, Taranto, Palermo.

SI Cobas organised a mass demonstration-and-picket at the gates of the Amazon fulfilment centre in Castel San Giovanni (near Piacenza), the largest Amazon warehouse in Italy, with about 1.600 permanent and thousands of temporary workers.

More than one thousand workers on strike, many of them from the same logistic compound in Castel San Giovanni, others coming from Piacenza, Milan, Pavia, Parma participated in the demonstration, which blocked truck traffic for five hours.

At the Amazon gates several workers spoke about the reasons of the general strike, about the need for Amazon workers to fight precariousness, exploitation and the fear regime inside the warehouse, and about their experiences of struggle, through which they have won better wages and working conditions, and – most important – respect where they had been subject to slave-like treatment.

A solidarity message from IG Metall workers in Dresden (Germany) was read and applauded, as well as the announcement of a solidarity action with the strike at the Italian consulate in San Francisco, mentioning the struggles at FedEx and Amazon.

These corporations, which in the U.S. are openly union-busters, in Italy have signed agreements with the official unions, in order to crush militant unions (FedEx, where a large majority are members of SI Cobas), or prevent them from gaining a foothold among workers (Amazon), while keeping a majority of its workers in temporary employment, under the constant threat of being fired and constant pressure to squeeze all of their energy into production, for the profit of Jeff Bezos and fellow
shareholders.

Amazon has complained having suffered, on October 11, the worst damage in its history.

The police has threatened retaliation against union activists.

The picket has shown Amazon workers the power of their number when united, and that the global giant Amazon is not invincible.

SI Cobas keeps working to extend the network of combative workers, in Italy and internationally, aiming to involve the millions of unorganised workers who are suffering increasing precariousness and exploitation.

Workers of the world, let’s unite!