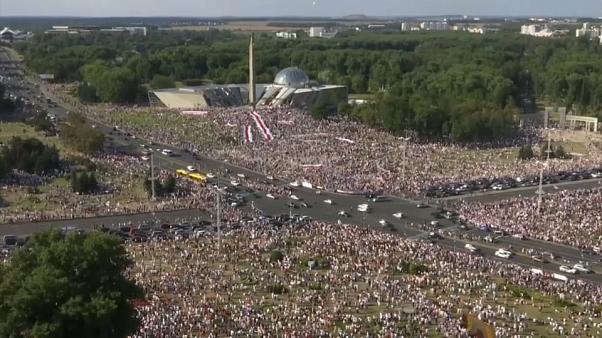 SI Cobas of Italy follows with participation and wishes success to the great Belarusian protest movement which forcefully demands the fall of the regime. In the face of the harsh repression of the first protests by the police forces, the movement not only did not bow, but was joined by hundreds of thousands people, forcing the government to release most of the 7,000 arrested, while members of the police were taking off their uniforms.

Particularly important is the strike movement of workers in dozens of factories and companies in all sectors, who after a long silence have become protagonists of the struggle for change.

They are calling for freedom of organization, expression and strike, after decades of dictatorial oppression by a State which guarantees, as in Italy and everywhere in the world, the exploitation of the proletariat by state and private capital. And they oppose the measures of liberalization and the dismantling of social protection, ongoing in Belarus as worldwide, in the East as in the West, in the North as in the South.

▶ ban on privatisation of enterprises

▶ democratisation of the political system

▶ cancellation of the contract system

▶ release of the groundlessly detained at promotions

▶ investigation of all atrocities committed against detainees

▶ ban on fines and loss of bonuses

We support their political and economic demands, aimed at improving working and living conditions, in the common perspective of a radical change in society, which only an independent workers’ movement can pursue. Independent of the old regime linked to state capitalism, as well as of the neo-liberal “democratic reformers” who advocate a “Western” model that deprives workers of much of the social achievements won in decades of struggle; independent of the conditioning by either Russian or Chinese, European or American imperialisms, which in competition with each other want to use the Ukrainian upheaval to expand their influence in Belarus and Eastern Europe.

We wish that the Belarusian workers will be able to form their own independent organisation with their own trade union representatives at company, local and national level. Just as the workers at the MZKT tractor and military vehicle factory in Minsk made their voices heard in Lukashenko’s face when he said, “Go away!”, so they won’t give credit to old and new members of the bourgeois opposition, supported by any external power. No matter how long it takes for Lukashenko’s regime to fall, possible even in the short term, just replacing people in power positions will not suffice to provide solutions to social problems, like low wages, working conditions and job insecurity, pensions, health care, and so on. A radical change of the system, in Belarus as well as here, will require challenging national and international struggles and the formation of a working class organisation capable of leading them.

Even in “democratic” Italy the workers have been deprived of the rights and achievements obtained in decades of struggle, and only with their struggle can they recover them.

SI Cobas is committed with other organizations to the call of an assembly of combative workers at the end of September to decide on initiatives of struggle in autumn, and to the formation of a single anti-capitalist front, for the struggle for workers’ immediate interests and for a better society.

The strength of workers lies in their self-organisation and international unity with workers in other countries.

S.I. Cobas, which organizes immigrants from more than 40 countries in the world, shakes hands with the Belarusian workers in struggle.