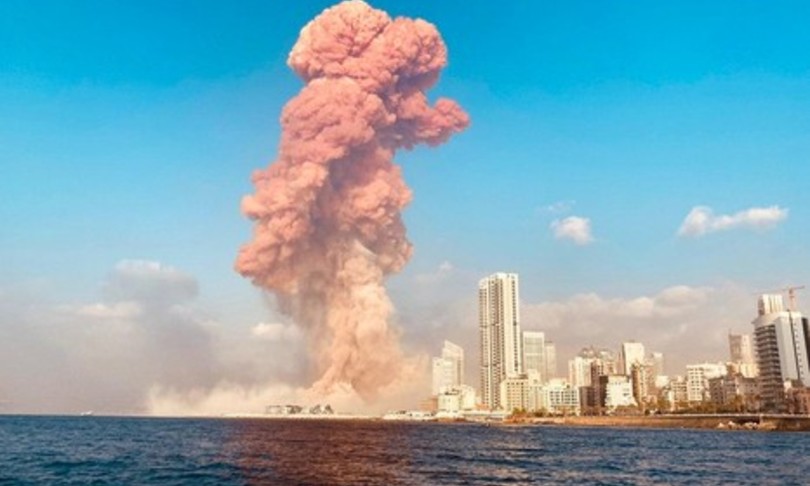 Against the Western vultures, who are trying to profit from the Lebanese tragedy.

Full support to the uprising mass movement, which has overthrown the Diab government and wants to put an end to the sectarian regime.

The terrible explosions of August 4 plunged Lebanon, already overwhelmed by a devastating economic crisis, into tragedy. Whether it was a criminal Israeli attack, as it is possible, or mere criminal negligence on the part of the Lebanese authorities, one thing is certain: from the instant after the explosions, the Western vultures rushed to Beirut to feast on its mourning. One for all, Emmanuel Macron, representing the old French colonial power and the other Western powers longing to bring Lebanon back under their rule. The lightning international conference set up by Macron together with Messrs Trump, Michel (for the EU), Conte for Italy, Sanchez for Spain, the IMF, the World Bank, that is the top external robbers of Lebanese wealth, ended with a diktat: we give you 250 million euros, but you must immediately make the “reforms” we tell you, sell off what is left of Lebanon and privatize/’liberalize’ everything. On the geo-political level, this initiative, of which Israel is an integral part, also tends to marginalize Hezbollah and sap the Syria-Iran-Russia axis.

But on the field, in Lebanon, there also is another player: the rebel mass movement which burst out last year on the 17th of October. It is back to demonstrate in these days for the “revolution” with an intensified anger by attacking the seats of government and of the banking power, and from the streets it has finally imposed the resignation of Diab’s “corrupt and incapable” government. Once again the international movement of the oppressed and exploited masses of the Arab world has shown the whole world its will, its ability to fight against its governments and regimes, and calls us to the unconditional support and counter-information needed to counter the distorted and warping visions of the events unfolding in Lebanon and throughout the region.

The great strength of the Lebanese uprising has been, since its inception, to indicate the need to put an end to the sectarian-cantonal regime inherited from French colonialism, designed to keep the Lebanese working classes divided according to archaic religious or ethnic boundaries, and – if necessary – to turn them against one another. This regime has favoured a multiplicity of parasitic power cliques sucking the blood out of the exploited masses, and a narrow, but very rich bourgeoisie, which has also swollen with the proceeds of the national debt, which has investments in various foreign countries and has woven close relations with the Gulf monarchies and the circles of global capital. The weakness of the Lebanese movement lies in the lack of a clear prospect for the time after – after the overthrow of the current political establishment, which was unable to avoid the frightening decay of the living and working conditions of a large majority of Lebanese people, and the marginalization and starvation of a large majority of Palestinian and Syrian refugees. We have already seen it wherever the “populist” parties have taken root, including Italy: the cry “let them all go to hell” (the members of the “political class”), although sacrosanct, is not sufficient to open a new road corresponding to the interests of the working classes, and leading to the only revolution by which they can free themselves: the anti-capitalist social revolution. In order to achieve this objective, the movement of struggle needs a clear political program and the corresponding strategy and political organization – weapons necessary to counter the aggressive and cunning internal and external enemies of any change that is really, not only in words, revolutionary. In Lebanon, among these obstacles there is also Hezbollah, which has grown on the one hand on its courageous resistance to Israel, and on the other on its patronage and sectarian management of poverty, resolutely opposed to putting an end to the sectarian regime.

Western vultures are trying to take advantage of the weaker side of the movement. They, the designers and guardians of the sectarian-cantonal system hated by the uprising crowds, disguise themselves as advocates of the demands of the movement of struggle. Macron, the violent suppressor of the yellow jackets, the bankers’ bagman, the supplier of the tear gas used by the Lebanese police, who disguises himself as a sans-coulotte friend of the demonstrators who fight against the forces of repression and set fire to the banks, is as credible as Mr. Netanyahu, the ruthless executioner of the Palestinians and the sworn enemy of the liberation of the Arab peoples, who has Tel Aviv lit up with the colours of the Lebanese flag and offers help and the intervention of his own intelligence to shed light on what happened! It is no coincidence that the movement immediately rejected the advances of Macron as well as Netanyahiu’s equally provocative ones. However, this does not make more credible, as friends of the movement of struggle and of the Lebanese workers, the competitors of the Western neo-colonialists: Putin’s Russia, Erdogan’s Turkey, or the Iran of the hyper-borgeois ayatollahs who, in these very days, are suppressing the strikes of the oil workers, nor the prudent China of Xi Jinping who says he is ready to “take charge” of the reconstruction (of the business of reconstruction). None of these governmental forces intends to undermine the mechanisms of operation of the global capitalist system that in every crisis crush the small dominated countries first, and first of all their proletarians and semi-proletarians. None of them is ready to forgive the foreign debt that strangles the Lebanese.

The global crisis of 2008 generated the conditions for the great Arab uprisings of 2011-2012, subsequently crushed in blood or dispersed by the counter-offensive of the threatened Arab bourgeoisies, with the support of the entire imperialist establishment. The present new and deeper global crisis, which brings with it a new oil crisis, is going to hit the entire Arab world and the Middle East with even greater violence. This area is rife with revolutionary upheavals, as we have seen from 2018 onwards in Sudan, Algeria, Iraq, Iran, Lebanon, and with the new, unrelenting protests of the Palestinians in Gaza. These uprisings need to carry through the objectives that have already been set – in Lebanon, for example, the destruction of the sectarian-cantonal system that suffocates the lives of workers and society, and more generally, everywhere, the overcoming of pestilential divisions on religious grounds and the conquest of fundamental freedoms for the working classes, starting with the freedom to strike and organize. But, as we can see in these days with the comeback of a ruinous social and political crisis in Tunisia, they will also have to reckon with the illusions that they can solve their problems with a simple change in government officials, leaving intact the machinery of imperialist domination and private ownership of the means of production.

The recent Lebanese movement began to take shape in 2012 with the struggle of teachers and immigrant maids, and the birth of grassroots trade union committees that organized them; it then got buried to re-explode with greater breadth and political thrust on October 17, 2019, combining the rejection of the sectarian system with a series of fiscal, environmental, social demands (against the high cost of living), and chanting the slogans “the people want to overthrow the regime”, “revolution”. In this movement there are still mixed, and almost indistinguishable, demands of a young and largely jobless proletariat with no prospects and those of a large part of the middle classes suddenly plunged into need. This boiling magma of energies of different social classes faces difficult challenges both because all the global and regional powers want to interfere in the affairs of Lebanon, and because the old, and more or less discredited, sectarian cliques will not give way easily. Solutions such as a technical government (the “technicians” are almost always the spokesmen of capital), or a government of the “professional classes” inspired by the Sudanese model, are unable to give any satisfaction to the vital needs of the oppressed masses. It will take much more than that! The proletarians, men and women, who today are in the front line in the streets, the shock power of the movement, the people who fight against the police and the army, are also called to become the political leadership of the movement itself. They are called upon to repel the sirens coming from the old colonialists, werewolves disguised as lambs; and to connect with the resurgent mass struggles in the Arab and Middle Eastern world. There is no revolutionary solution to the Lebanese question in isolation, without a complete questioning of the entire international capitalist order in the region – and in the world.

Our position as internationalist revolutionaries can be condensed as follows:

Proletarian women and men of all countries, let’s unite! United we are invincible!