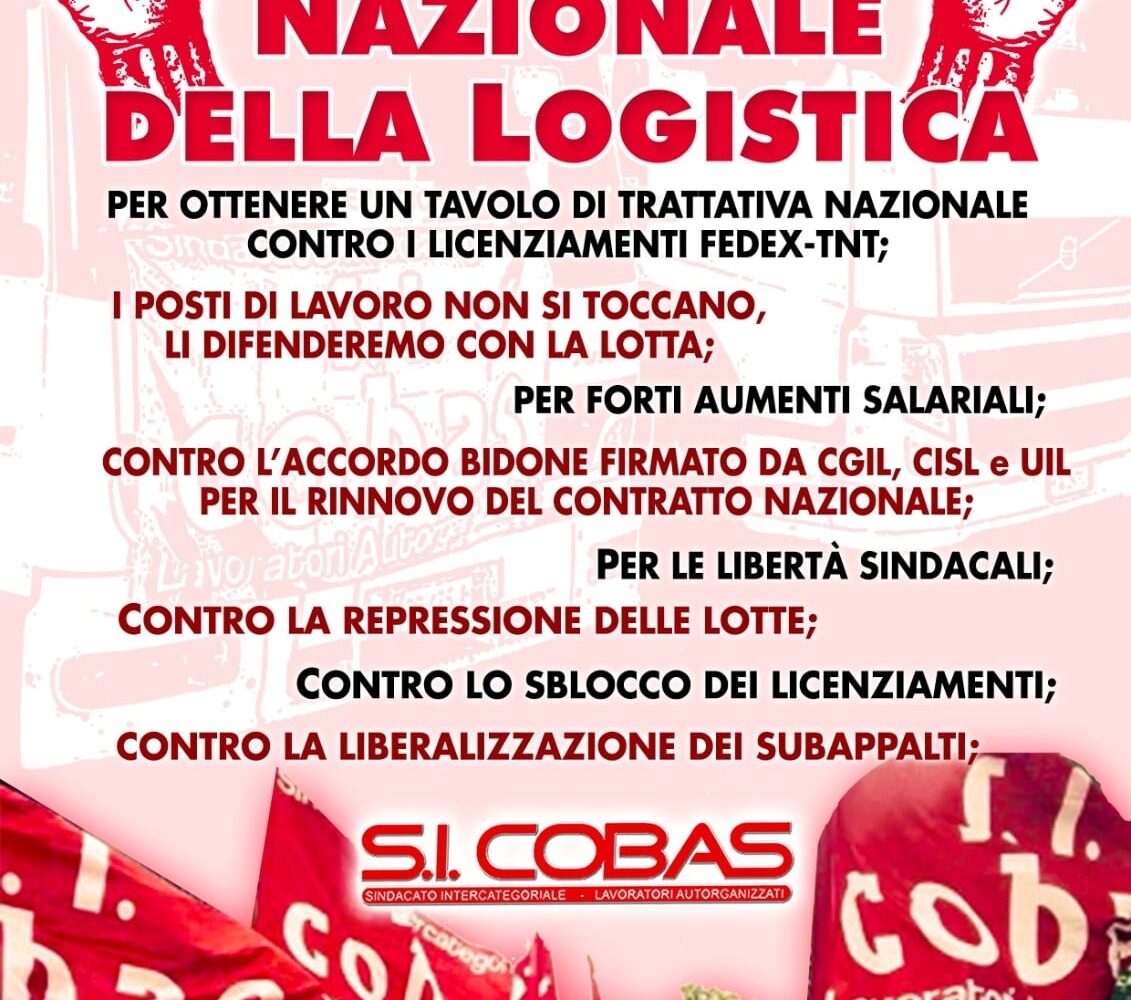 ON 18 JUNE IS A NATIONAL STRIKE IN THE FREIGHT TRANSPORT AND LOGISTICS SECTOR!

The formal release of layoffs is now upon us.

By the will of the Draghi government, between summer and autumn hundreds of thousands of proletarians will be thrown into the streets, adding to the almost 950,000 temporary and intermittent workers who have already lost their jobs during this year and a half of the pandemic because not covered by the moratorium launched by the Conte government.

To this already announced social massacre is added the total liberalization of subcontracts contained in the Simplifications Decree.

In recent years, logistics workers have experienced firsthand that subcontracts only serve to lower wage levels and workers’ rights to a minimum, to create a dense barrier of intermediaries between workers and client companies to circumvent national contracts and feed business of corporals and organized crime.

The dimensions of the frontal attack launched on the working class are well summarized by what has been happening in recent months within the Fedex-TNT supply chain, where the bosses first closed the Piacenza hub overnight, throwing 272 families into the street, then with the complicity of Cgil-Cisl-Uil they started a process of internalization that cancels all the achievements obtained by workers in the last 10 years, excludes workers suffering from physical illnesses, introduces a climate of terror in the warehouses and expels the rank and file trade unions (primarily SI Cobas) from the negotiating tables, although represent the majority of workers.

In this dispute, the complete subordination of the government to the employers’ diktats became clear: to the countless requests of SI Cobas to open an institutional table with Minister Giorgetti, the only response was that of repression, as demonstrated by the positions carried out outside of Palazzo Chigi last May 21 and the endless series of complaints, fines and clearance papers against the workers of Piacenza in garrison outside the Milanese warehouses.

In recent weeks it has been signed between masters and confederates the renewal of the CCNL Freight Transport and Logistics, with increases of a few tens of euros that will not even serve to compensate for the probable recovery of inflation and the increase in the prices of basic necessities: a slap in the face for those hundreds of thousands of workers in the sector that only a year ago was celebrated by the government and the bosses as strategic to face the spread of the pandemic!

FOR THESE REASONS ON NEXT 18 JUNE THE SI COBAS HAS LAUNCHED A NATIONAL STRIKE IN THE WHOLE FREIGHT TRANSPORT AND LOGISTICS SECTOR.

We call to mobilize all workers in the sector, wherever they are unionized, to create a day of struggle that can represent the starting point for building a great mobilization from below and a truly general and mass strike against the release of layoffs.

FOR THE SAME REASONS, SATURDAY 19 JUNE WE WILL DEMONSTRATE IN ROME TOGETHER WITH THE ASSEMBLY OF COMBACTIVE WORKERS AND THE ANTI-CAPITALIST ACTION PACT – FOR A UNIQUE FRONT OF CLASS.