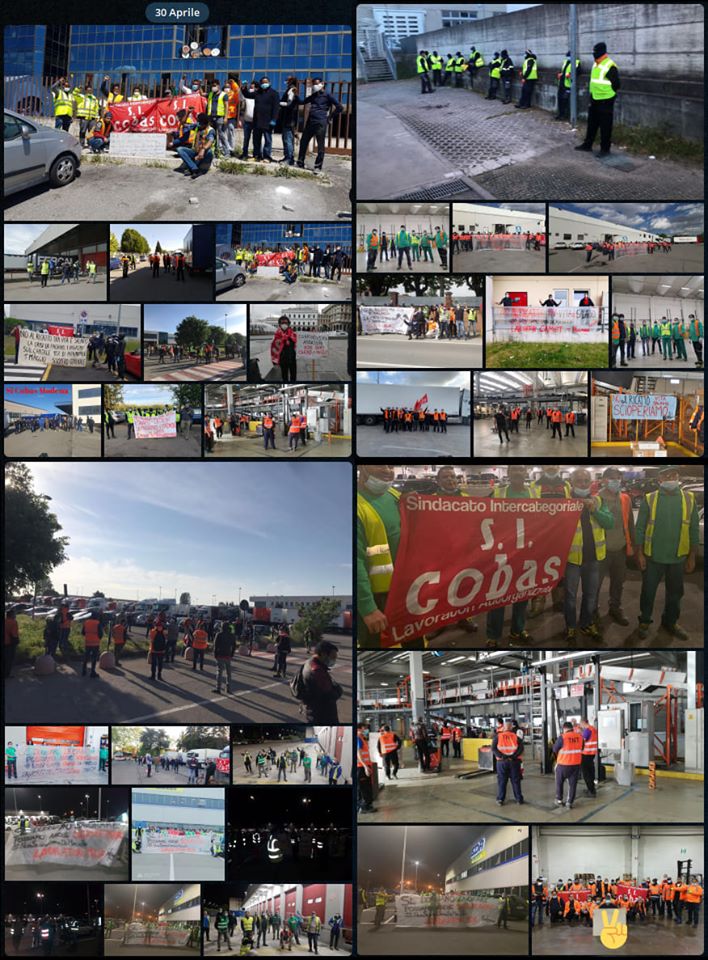 APRIL 30 AND MAY 1:
STRIKE AND MOBILIZATIONS THROUGHOUT ITALY!

While we are going to continue our updating, later and tomorrow, but a great participation in the April 30- May 1st strike is already a fact: either in the form of active strikes, with workers lining up inside or outside warehouses, abstaining from work, or actions outside factories and companies, blocking the main logistics supply chains.

In the meantime, we are also recording many initiatives in several cities, outside prefectures and institutions, which are going to continue in the afternoon and tomorrow. Many initiatives of the “Vogliamo Tutto [We Want Everything]” campaign, from the House of Representatives in Rome with the Movements of struggle for the Right to Housing, up to Naples with the organized
unemployed.

The signal given by thousands of workers today is clear:

Whereas “Phase 2” of government and the bosses means:

MAKING US DIE FROM COVID-19 OR STARVATION!

LETâ€™S TAKE BACK TO THE STREETS AND OUR UNION FREEDOMS!
LETâ€™S STRIKE TO DEFEND OUR HEALTH AND WAGES!

More than two months after the outbreak of the coronavirus pandemic, the facts dramatically demonstrate what SI Cobas has forcefully denounced since the beginning of the lockdown:

The emergency has turned into a real carnage (to date almost 27,000 official deaths) due to the decades of cuts in healthcare spending that have led to the collapse of most hospitals in the hotspots of the pandemic;

For the majority of workers, “phase one” never existed: during the entire mandatory quarantine period, companies with 55 percent of the workforce continued to produce non-essential goods even in the areas most affected by the infection, in defiance of any prohibition and in most casesin violation of the most basic rules for the protection of workersâ€™ health and safety. All of this with the complicity and “silent consent” of government, prefectures and official unions.

For these reasons, factories, plants and warehouses (as well as hospitals) have become the main vectors of contagion. Thousands of workers have passed on the virus to their colleagues and families and many have died, to the point that a few days ago even INPS, the national social security institute, officially recognized that people who have kept working in these last weeks have a 25% greater risk of getting sick with COVID-19 than the rest of the population. Workers have been sent to war in the name of profits and “national production” while their employers and bosses have been staying comfortably at home.

The emergency measures issued by the Conte government once again guarantee the roast to the bosses (400 billion in credits, tax relief and grants) and leave workers with just the smoke: of the already poor protections provided by the governmental decree to compensate furloughed workers we havenâ€™t seen even the shadow, to date. At this rate, in a few weeks millions of workers will be unable to make ends meet, joining the millions of unemployed, fake self-employed, temps and irregular workers who are already starving.

Now, with the epidemic still in full swing, thousands of new infected and hundreds of new deaths every day, they have decided to “reopen” all activities, but they want to continue

to shut our mouths, preventing us from holding assemblies, going on strike, voicing our thoughts and our dissent, under penalty of charges, fines and batons!
CoViD-19 is becoming an easy pretext to impose an unprecedented police state, where you can only go out to produce, let yourself be exploited without protection and then to consume, while they forbid us any form of social life and force us to stay locked at home in the name of “containment”.

AGAINST THIS TRAGIC FARCE LETâ€™S RESPOND HERE AND NOW!

WE ARE NOT SLAUGHTER MEAT!

FOR THIS REASON, TODAY 30 APRIL AND TOMORROW 1 MAY WE ARE STRIKING AND FIGHTING!

Let the bosses pay for their crisis: a 10 percent wealth tax on the wealthiest 10 percent, full protection of safety, health and wages for all; immediate advance of compensation for furloughed workers, paid by companies; revitalization of a public, free and universal healthcare system; full freedom to strike and demonstrate, and for union and social initiatives; and stop military expenses!