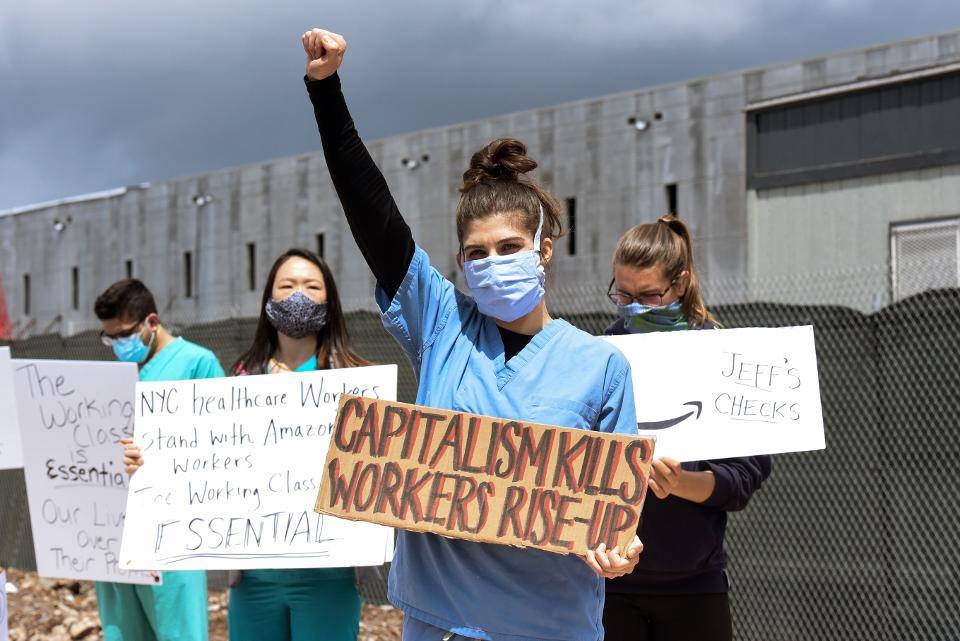 Women against oppression, exploitation and racism

1 May 2021 can and must mark a moment of social and class mobilisation against the destructive violence of the system in which we live. The pandemic is just the latest example of this violence that only our organised and mass struggle can stop.

Millions of workers are affected all over the world, because it has been addressed by states and governments with the sole aim of safeguarding profits, continuing the robbery of the wealth of the peoples of the global south, exploiting women and men in the four corners of the planet.

Instead of going to the root of the current catastrophe, the bourgeoisies are using this crisis to organise the exploitation of labour more efficiently.

Workers will pay the price, but especially women workers, who are precarious and forced to choose between work and caring for children and weak family members. Never before have there been so many self-layoffs, contracts are not being renewed and, with the release of redundancies, women will be the first to be thrown out. Not to mention the women who, in order to bring home a few euros, were forced to work illegally, and are now left with no means of subsistence.

We cannot accept being forced into poverty, into dependence on their husbands, into running the risk of domestic violence, conditions that will only get worse with the pandemic. We will not resign ourselves to pulverisation and isolation, we will continue to fight despite intimidation and increasing repression of struggles, to defend our rights!

We will fight for guaranteed work and wages and for services related to social reproduction!

Women have paid the consequences of the mismanagement of the pandemic on their own skin, because they are at greater risk of contagion as care and school workers, because of the lack of counselling and reproductive health services, which has forced them into unwanted pregnancies, or to renounce motherhood due to the lack of necessary treatment and checks. This is in addition to the repressive and reactionary attack underway against the right to abortion and the use of the Ru486 pill in the regions administered by the Lega and Fdi and supported by ‘pro-life’ associations. Women’s health is also in danger of being compromised by the lack of opportunity to have the necessary treatment for chronic illnesses and preventive checks for the most common cancers, by stress and fatigue that has put at risk or aggravated their psychological distress and mental health. This is because the vocation instilled in women, from the moment they are born, has been and still is to put caring for others before caring for themselves.

We claim the right to health for everyone!

Prevention and territorial medicine are the real weapons against the spread of the pandemic and against the excessive power of the big pharmaceutical companies that produce drugs and vaccines only if their profit is guaranteed. And at the service of these profits, governments and the actions of states are bent. These are our enemies, whom we must fight!

As women, we can expect nothing from the large amounts of billions coming in, destined to support social classes and business sectors (digital, green) from which we are mostly excluded.

What we have to expect is a worsening of our general living conditions and a completely uncertain future for those who will come after us.

With unity and struggle we can build a barrier against this global attack, there are millions of us in the world, and 1 May, International Workers’ Day, reminds us of this!

The only choice we have is to overcome isolation and divisions and build a path of tough, united and convergent struggle with all the movements that are the expression of our class and are fighting to put an end to this social system that brings death!