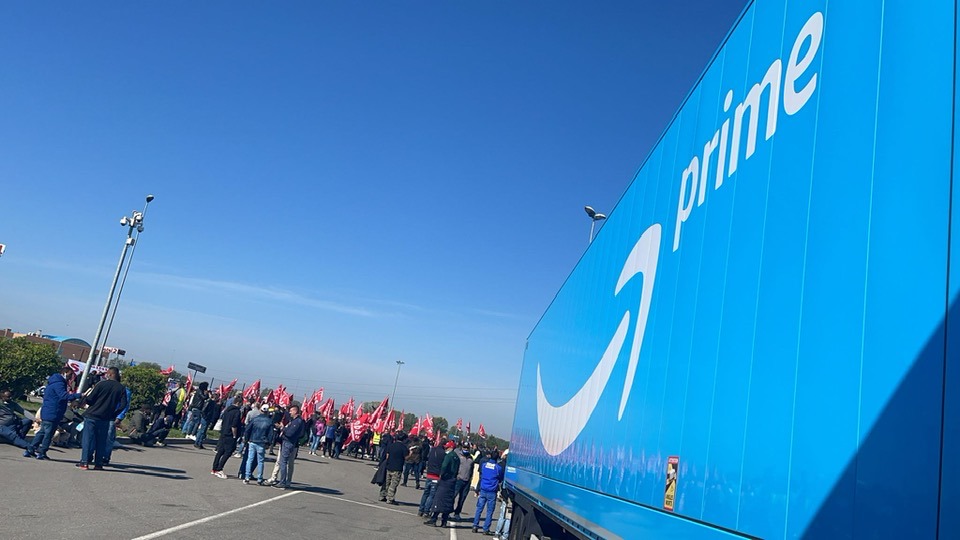 FOR THE GENERAL STRIKE

AGAINST OWNERS AND DRAGHI’S GOVERNMENT:

MAKE THE RICH PAY THEIR CRISIS!

Today, thousands of workers organized with S.I. Cobas have gathered in Piacenza from numerous cities all over northern Italy, to block the biggest Amazon warehouse in the country:

All united, the workers in mass strike have taken the position in front of the major gates of Amazon plant in Castel San Giovanni – the most important Italian logistics area, strategic for trade traffic from south to north in the Mediterranean sea and east to west in continental Europe – maintaining the position all day, blocking hundreds of trucks full of goods causing great damage to the profit of the main logistics corporation, owned by the American capitalist Jeff Bezos (one of the richest in the word).

All day, with speeches and rallies in the picket line, workers operating in logistics and other essential sectors (public healthcare, food and metal industries, transport lines…) have denounced the exploitation and oppression of Amazon workers in all warehouses around the world: always at work, day and night, even during the Covid pandemic.

This first, successful strike – following others recently organized by workers in the warehouses in US, Germany, Spain, France and Poland – materially shows the real power of the working class when concretely united and organized.

Amazon workers as well, using the historic weapon of working class solidarity, can be united and organized to strongly fight for salary, health, rights and dignity.

Today, the important mobilization of thousands of workers for the general strike (declared together by 15 unions) is blocking the logistics and transport sectors, heavily impacted the production and distribution of goods – in Italy and abroad. In big manifestations, workers in strike have crossed the main Italian cities protesting with thousands of unemployed workers and students against the attack by owners and Draghi’s government against working class.

In the chaos of the capitalism in crisis, the workers in general strike are demanding immediate and significant pay increases, the reduction of labor time also to reduce unemployment, the defense of workers’ health and security, the end of owners’ violence and State repression against workers in strike and combative unions, a guaranteed salary for all unemployed and precarious workers, the end of State racism and any discrimination against immigrant workers, the end of mass fires “in the name of the crisis and Covid”, the liberty for workers to freely unionize also doing the strike and protest, against the “green pass” and any discrimination against workers, the end of military expenditure to stop all “foreign military missions” abroad, and a million tax of the 10% over the richest 10% of the population.