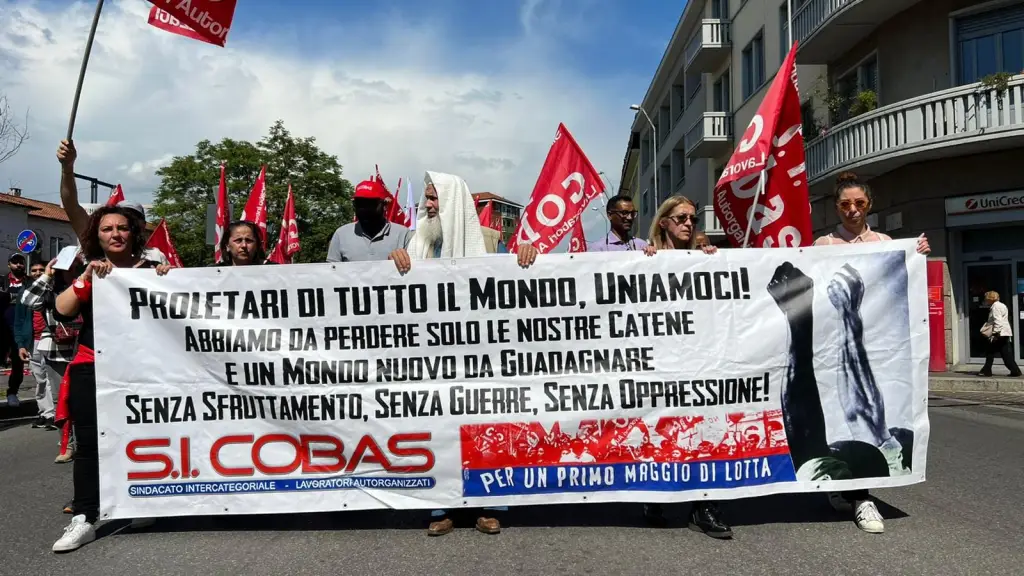 A big repressive provocation against the logistics proletariat,

At dawn this morning a heavy and insidious repressive operation began against leaders of SI Cobas (the national coordinator Aldo Milani, Mohamed Arafat, Carlo Pallavicini, Bruno Scagnelli) and of the USB, which were subjected to house arrest.

The provocative charge is that of conspiracy to commit acts of private violence, resistance to a public official, sabotage, interruption of public service on the occasion of strikes and pickets to “extort” conditions of “better favor” from bosses not for the workers, but for themselves – in a sort of “feud”, also for private purposes, between “rank and file” unions.

In short: the reality of the facts denied, mystified, overturned. Because in the last 10-15 years, starting with Bennet of Origgio, the logistic proletarians, immigrants in the vast majority, have been the protagonists of the only, significant cycle of struggle that took place in Italy in the last decades – the only one with real struggles, real strikes, real pickets, real coordination between the different realities, real battle platforms. Really self-organized struggles by the workers themselves that have given rise to an experience of new militant syndicalism embodied above all by SI Cobas. The only struggles that – in a context of general retreat of the working class – have marked significant advances in the material condition (wages, hours, guarantees, etc.) and in the levels of organization and class consciousness of the proletarians, both porters and drivers.

With the help of the CGIL-CISL-UIL apparatuses, the bosses did everything possible to keep this process of combative organization of the class confined to a logistics sector. But seeing its impetus and strength grow anyway, they set in motion their repressive apparatuses from 2017 with the grotesque puffery against Aldo Milani woven by the Levoni and their accomplices of the Modena prosecutor’s office – then miserably collapsed with his full acquittal in the first instance. But the “logic” that aims to disfigure the image of conflictual syndicalism returns in this latest investigation with the same false theorem: in logistics violent and illegal actions are carried out to obtain private advantages, as individuals or as organized clans related to this or that union. An “extortion” activity against the poor bosses who are harassed and sent to ruin …

The Pradella prosecutor’s theorem has been packaged with care: years and years of systematic and 24-hour spying by some executives in the obsessive search for the smallest clue and / or presumed private vice useful to tarnish the image and prestige they have conquered in years of struggles against exploitation and illegal hiring, of strenuous gains in wages and in terms of dignity. Having failed to wipe out the combative trade unionism with the anti-strike rules and the synchronized sticks of police and private mercenary squads, the penal code is now being used on the basis of an alleged “moral code” which, according to the investigators, should regulate methods and purposes of strikes. In reality, through the usual scheme of the mud machine largely similar to the media-judicial campaigns that for years have affected the unemployed organized in Naples or the housing movements in Rome, it is precisely the weapon of the strike that they want to hit and knock down in another way. Together with the strike, the target is the resistance fund through which the union allows workers fired or affected by repression to continue to fight, preventing them from bowing to the infamous blackmail of hunger.

And it is here that the fiercely masterful nature of this and other investigations is revealed. The political message is clear: the bosses are allowed to manage their billions, the fruit of the exploitation of workers’ labor, at their leisure: evading taxes and contributions, bribing politicians and state officials, transferring immense wealth to tax havens, laundering amounts of “illegal” money in hedging activities. On the contrary combative trade union organizations have to account to the bourgeois state down to the last cent for the voluntary contributions of workers or for the very normal and banal conciliations between bosses and workers.

The prosecutor Pradella, in her press conference, had the effrontery to argue that the repressive action is not against the SI Cobas and USB unions, absolutely not! Indeed, it is in their defense, especially in defense of workers organized with SI Cobas and USB to free them from those who would have abused their struggles – in fact, so far, the judiciary and the police, in Piacenza and everywhere, have protected these struggles to the sound of hundreds of complaints and trials, convictions, fines, street papers, arrests, batons, threats!

As for the “competition” between trade unions, if there is some form of “competition” (which we do not like) between those who manage to obtain – with the struggle – some more advantages for the proletarians, this is a crime to be punish with arrest. Only the downward competition between the CGIL, CISL and UIL is fine: and it must be protected and rewarded with super-liquidations, seats in parliament or on the boards of directors.

The Italian judiciary that in the last half century has allowed organized crime, strongly present in logistics, and more or less fake cooperatives intent on robbing their employees obliged to be “partners” (a structural harassment on which no magistrate has to complain), to rage like grasshoppers making profits and extra-profits for themselves and for the multinationals; this judiciary which has allowed, favored and covered with its inaction every abuse, every violation of the law, committed to the detriment of female workers (does the name Italpizza tell you anything?) and of workers, has begun to take action with a series of repressive initiatives that with this investigation reach the apex of impudence for the pretense of being in defense of workers – rather than, as is evident even to blind volunteers, shamelessly defending employers’ interests.

Italian governments were no less. First of all, the Conte-1 government which in 2018, with the infamous Salvini decrees, turned the picket into a crime and hit immigrants seeking asylum hard, blatantly favoring organized crime in its desire to recover the seized assets (speaking of Lega-Cinquestelle “populism” friend of the workers – shame on those who flirted with them and still flirt with them!). And now the Draghi government which, on a mandate from Assologistica, sneakily introduces an amendment to art. 1667 of the civil code which eliminates the joint and several liability of the client companies (often multinationals) for the theft of wages methodically operated by cooperatives and supplier companies.

In between, an infinity of police and carabinieri interventions against pickets, two workers murdered by strike-breakers, Abd El Salam of the USB and Adil Belakhdim of the SI Cobas, with total impunity of the murderers, many wounded in attacks by private gangs in the service of FedEx or bosses from Prato, again in total impunity, thanks to the protection of the state repressive apparatus. In Piacenza, in March of last year, immediately after a thrust by the judiciary against the SI Cobas rejected by mass mobilization, FedEx raised the level of the anti-worker attack by decreeing the closure of one of the most combative and organized warehouses, in self interest and of the super-power Amazon, which saw the struggle movement threateningly advance up to the impassable gates of its fortresses from which the union is banned.

Not many have understood, even in “rank and file” trade unionism, the general meaning of that attack and the equally general political importance of the resistance struggle of the FedEx porters in Piacenza, for logistics and for the entire class movement. A cowardly lesson was also dealt with: “let’s be good, let’s look for good relations with the owners, among the owners there are also humans (very human …), we have already obtained everything we could get, we pull the oars in the boat”. A suicidal illusion because from time to time the bosses remain cautious, as they see an organized and alert working mass in front of them. The more workers sit confident that no one will touch them, the more they expose themselves to the risk of being beaten and losing, even in a single day, what they have achieved in months and even years of struggle.

Especially in times of crisis and war. Yes, because this is the decisive variable that is making state repression cruel. After two years of pandemic and in a war that will certainly not end soon and will have enormous effects of social devastation, the bosses and the parliamentary forces of government and “opposition” know better than us that social malaise in the places of work and in society has reached such a level of tension that it can suddenly explode at any moment. This explains the intensification of repression in a preventive key: defensive, terrorize, disorganize, de-legitimize, divide and finally normalize what has so far been the most active and combative fraction of the working class, the only one that has given some hint of life and reactivity even against war, to prevent the contagion effect. This autumn is really scary for the employers’ criminal associations and their coordination committee headed by Draghi.

The first, immediate workers’ reactions in Piacenza and other cities are showing the reaction capacity of the proletarians, and it is to be hoped that today’s strike called by both SI Cobas and USB will give a renewed impulse to that mobilization that is necessary to bring down this new house of cards and lies.

Let us address with confidence, stubbornly, the working class as a whole, whether unionized or not, to show how this umpteenth attack affects everyone, and must not pass. There is no illusion that our requests could be postponed to better times. These better times will only come from the united and determined struggle of the working class as a whole against the bosses-government axis, against state repression, against the capitalist wars, against capitalism.